Here, we have listed top evergreen songs for the occasion of Valentine's Day, the listed Bollywood Romantic songs will make your day remarkable.
The love season of the year has started, on the occasion of Valentine's Day, you can feel the aroma of love in the air. It's a day when couples express their love and gratitude to each other, couples make the day remarkable by gifting each other and taking promises to be together until the end However, songs are the only things that make the day unforgettable. Love and passion can be easily described through songs, that complete the valentine's day. 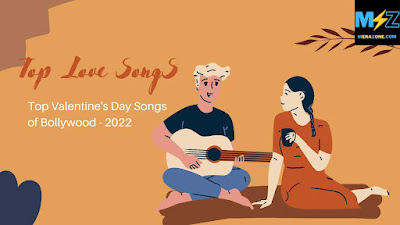 You may want to read this post :
Here, we have listed top evergreen songs for the occasion of Valentine's Day, the listed Bollywood Romantic songs will make your day remarkable and joyful.

One of the most intimate and melodious song, featuring Sidharth and Kiara from the movie Shershaah of 2021, the song is sung by Jubin Nautiyal and Asees Kaur.

It is the solo triumph hit by Arko, starring Kriti Sanon and Ayushmann Khurrana from the film Bareilly ki Barfi. The song is well known among couples and youth and is considered one of the best romantic songs of all time.

The passionate and amorous song 'Tumse Bhi Zyada' is from the movie Tadap featuring Ahan Shetty and Tara Sutaria. The song is a duet performed by Arijit Singh and Pritam.

One of the best evergreen romantic song 'Baarish' is from the movie Half Girlfriend, Shraddha Kapoor and Arjun Kapoor are appearing in the lead roles. The song is a duet by Ash King and Shashaa Tirupati.

Atif Aslam presenting the legendary song 'Dil Diyan Gallan' is from the movie the Tiger Zinda hai starring Salman Khan and Katrina Kaif. The song depicts the feeling of a strong relationship.

The Mellifluous song sung by Sachdeva and Mansheel Gujral, is from Badrinath Ki Dulhania, choreographed on Varun Dhawan and Alia Bhatt. This song truly portrays the importance of love.

Another triumph hit by the movie Shershaah, this is a trio sung by B Praak, Jasleen Royal and Romy.

The King Of Romance Shah Rukh Khan and Kajol starrer of the song 'Janam Janam' is sung by Arijit Singh and Antara Mitra, will set you up in a loving mood.

The hot song, 'Tera Ban Jaunga' is from the movie 'Kabir Singh' where we saw passionate performances by Shahid Kapoor and Kiara Advani. The singers are Tulsi Kumar and Akhil Sachdeva.

Romance blockbuster from patriotic film Kesari choreographed on Akshay Kumar and Parineeti Chopra, this is another triumph hit of Arijit Singh and Asees Kaur. The soft and melodious music will make you fall in love with it.

A blockbuster starring stylish star Allu Arjun and Rashmika Mandanna in the movie Pushpa, which caused a social sensation on the Internet shortly after the film's release, Allu Arjun's unique acting style left a deep impression on the audience. The singer of Hindi song is Javed Ali.

Another hit by King of Playback Arijit Singh, starring Prabhash and Pooja Hegde from the movie Radhe Shyam. The song is count in the list of the best romantic songs.

This song is really made for true lovers, the movie Jersey starring Shahid Kapoor and Mrunal Thakur is the lead. The song is in top spot of ultimate top songs list of Amazon prime music. The songster of song is Sachet - Parampara.

The Chartbuster song is from the movie Shiddat and the lead singer of the song is Manan Bhardwaj. It is one of the most loved songs among youngster.
🔔 Subscribe To Notification Updates
Hi, I'm an editor and content writer for merazone.com, and I just love this new world of science and technology which brought my thoughts to you.