To help you, we have listed the number of Chhatrapati Shivaji Maharaj Jayanti songs that will passionately charge you and make your day extraordinary.

Shivaji Jayanti or Chhatrapati Shivaji Maharaj Jayanti is celebrated every year on February 19. This year we are marking the 392nd birthday of the great Maratha ruler Shivaji. Chhatrapati Shivaji's unique qualities such as knowledge, strategic and diplomatic thinking, solidarity and equal treatment of all classes are very inspiring for next generation of youths and students.

On the day, one can see extensive celebrations in Maharashtra, many cultural programs are organized as well as road shows and more, Everything around is covered in saffron flags and decorations, so music plays an important role in the joyous occasion. 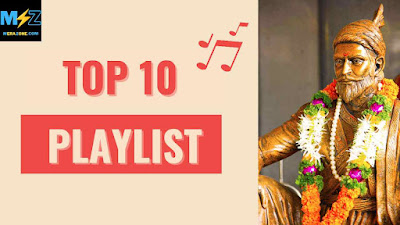 To help you, we have listed the number of Chhatrapati Shivaji Maharaj Jayanti songs that will passionately charge you and make your day extraordinary.

The Passionate song is from the upcoming Marathi movie 'Pawankhind' based on the Shivaji's Military commander Baji Prabhu Deshpande, the movie scheduled to release on 18th February. The song popularized in no time after it's first release. The welcome song expresses the happiness and joy of the people of Chhatrapati Shivaji Kingdom.

Mellifluous song 'O Raje' is from the movie 'Me Shivajiraje Bhosale Boltoy' released in 2009 starring Mahesh Manjrekar and Sachin Khedekar in the lead roles. The voice behind the song is Sukhwinder Singh. The movie and song is considered one of the best marathi movies ever made.

'Maay Bhavani' is the enthusiastic song from movie Tanhaji starring Ajay Devgn and Saif Ali Khan in the lead roles. The movie based on the real life story of Shivaji Maharaj's trusted lieutenant Tanhaji where the song was chartbuster.

The song or powada is also from Marathi film 'Me Shivajiraje Bhosale Boltoy'. The skit is from 1657, when Adilshah sent veteran Afzal Khan to arrest Maharaj Shivaji in response to his recent fort capture in Javali. This song is one of the most popular songs in the movie.

Triumph Blockbuster again from the movie Tanhaji released in 2020, the passionate song was a triumph hit. The song is sung by Mehul Vyas and choreographed on Ajay Devgn and Saif Ali Khan. The beats and music will make you fall in love with it.

The Blockbuster Intense music is also from the movie Tanhaji, the triumph hit sung by Sachet - Parampara. This epic song is in the favorite list of every follower of Shivaji Maharaj, Ajay Devgan expresses his character Tanhaji well which makes his songs and movies so popular.

An animated song describing the biography of Shivaji Maharaj, from the birth of Shivaji to the establishment of the Maratha Empire. This song is sung by Shabab Sabri where the story in the video song is explained very well. The Educational video is best for kids and adults.

Triumph hit 'Mard Maratha' song is from movie panipat featuring Sanjay Dutt, Arjun Kapoor and Kriti Sanon in lead role, the story line of the song based on the Third Battle of Panipat of 1761,  Arjun Kapoor plays Sadashivrao Bhau, who leads the war between the Maratha and Durrani Afghan empires.

The mellifluous song sung by Kailash Kher, a tribute song dedicated to Chhatrapati Shivaji Maharaj. This song shows Shivaji's contribution and importance, this song is made for Shivaji followers.
🔔 Subscribe To Notification Updates
Hi, I'm an editor and content writer for merazone.com, and I just love this new world of science and technology which brought my thoughts to you.

The love season of the year has started, on the occasion of Valentine's Day, you can feel the aroma of love in the air. It's a day when coupl…